Skip to content
You are here:Homesports “I am responsible for defeating Afghanistan because …” Shakib Al Hasan surprised everyone by telling the truth
Dhaka (Daily Pakistan Online) Bangladesh cricket team captain Shakibul Hasan has claimed responsibility for the historic defeat at the hands of Afghanistan and said, “If anybody else had become captain in my place, it would have been better.” 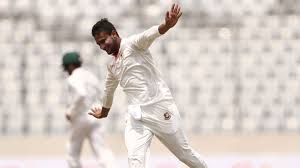 Must read: Israeli army destroys second drone in two days
Talking to the media after the match, according to the details, Shakib Al Hasan said, “If I was not given captaincy, it was better because I think it is better for my game but if in future I will be entrusted with leadership.” Then there will be a lot of discussion with the board in this regard.

Shakib Al Hasan was the only Bangladeshi player to perform well in the ICC Cricket World Cup 2019. He was the third highest run-scorer in the tournament, scoring 606 runs in 8 innings and also taking 11 wickets.

Must Read: Fawad Chaudhry Announces Introduction of ATM but What Will Get Out of This Machine? Not money. ۔ ۔
Shakib Al-Hassan said, “I am disappointed with the defeat at the hands of Afghanistan and the responsibility falls on me and me only because when I came to bat I was in a lot of panic which resulted in the first ball being dropped. And it’s my fault, I should have avoided playing the cut shot while doing my duty.

“We only had to play for an hour and ten minutes, but I got out on the first ball, which also created problems for the team,” he said. If I stayed on the wicket, our dressing room would have been especially satisfying.